A few weeks ago I had the pleasure to speak at the Spinoza summer week, in one of the most rural and quiet places in the Netherlands. The theme of the week was Spinoza and Jewish tradition. A subject which I didn’t know very much about, but I interpreted it more widely, to be able to present my textual interpretations of the Ethics, the Short Treatise and the Theological-Political Treatise on Spinoza’s ideas about going beyond religious traditions, and still recognizing the importance of religion for human beings.

One of the benefits of giving the lecture was being invited for the one-day Spinoza tour through North and South Holland (the two provinces by that name) to see all the places where Spinoza lived, in his short life (1632 – 1677). Today I did the tour, with four other interested people, and our guide Jossi Efrat, a passionate narrator. Due 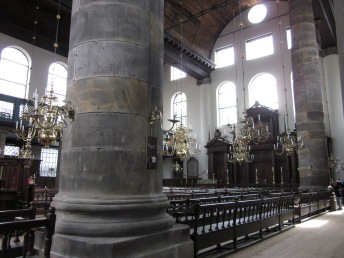 to his great knowledge on the Portuguese Jewish community in Amsterdam (we started out in the Portuguese synagoge over there) and our many questions, we lagged behind on our schedule, and had to skip the end, in the end, which would have included the two houses where he lived in The Hague and the New Church, where he was buried.

This is not a very philosophical post, I agree, but I allow myself this because it is summer, and I promised to two of my co-tour-walkers to write a post about it. It was a day with many impressions. After seeing the place at the Waterloo square, where once a house of the Spinoza family had stood, and the earlier synagogue where the ban against Baruch had been spoken, we went to the Jewish burial site at Ouderkerk aan de Amstel, where I was able to say a si 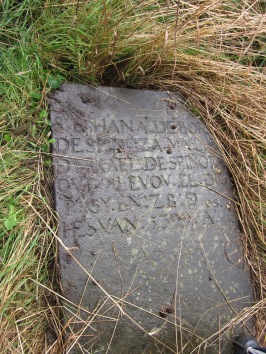 lent salute to the remains of the woman who had given birth to this great thinker: Hanna Deborah. She died when Spinoza was six, and he was raised by his father’s third wife.

We took to the road once more, and came to the newly restored lovely little house in Rijnsburg where Spinoza lived after leaving Amsterdam, possibly because it provided him more opportunity to be in contact with scientists and philosophers at Leiden university, possible also because of his contacts with the Collegiant community (freethinker protestants). I had been to the Rijnsburg house before, the first time when I was still a student, so it must have been thirty years ago. I was invited by the secretary of the Spinoza society, back then, Theo van der Werff, who helped me through my dissertation years like a living pre-internet search engine, finding books and articles and bibliographical details. And providing a lot of support to

o. Being in the little house once more was great. Anyone looking for a beautiful seventeenth century philosophical atmosphere should go there sometime. Although most of the interior is not original but reconstructed. For booklovers there are two bookcases filled with old leatherbound books, one the reconstructed library of Spinoza.

Finally we went to Hofwijck, the little palace of the Huygens family, where Spinoza worked together with son Christiaan on his scientific experiments, conducted supposedly in the attic. Some of the original instruments can be seen there. Our guide took us through difficult-to-find paths to show us how Spinoza had walked from the house where he lived in that time, in the village of Voorburg, along the Vliet, a canal connecting several cities, to Huygens’ place. Hard to find because nowadays a railway and a highway

are built atop the old infrastructure.

Like I said, we missed out on the The Hague traces of Spinoza, which I however had also walked in the past. They mark the most political phase in Spinoza’s life, as he was involved in the struggle for the highest power in the Netherlands of those days, which was not just about the potential power of the Orange family, but also, which interested Spinoza more, about a more secular society or one in which calvinism had more prominence. Thinking beyond religious traditions, a society where everyone could think or believe as he liked, was one of the things Spinoza was most passionate about. One of his reasons being, I think, very much pro-religion: because belief that is based on duress cannot be true belief…

Although we steeped ourselve in Dutch society and politics of three centuries ago, I am still of the same opinion as I was in my PhD years: that reading Spinoza is to be advised for anyone who wants to develop his/her reflection on religion, freedom, and harmony in society.